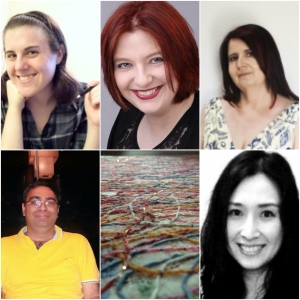 Welcome to the eighth installment in our quest to introduce you to the poets behind the Rhysling Award nominated poems. Today we have 6 wonderful and fascinating poets for you, who range from newer poets who have exploded onto the scene more recently to superstars and masters of the genre. We hope you enjoy learning more about them.

Their poetry can be found in full in the Anthology (which, if you are a member, you will receive and if you are not, you may purchase a PDF or order the print anthology now). As noted before, we will link to the nominated poems here where possible.

P.S. Cottier is a poet who occasionally writes prose. She has worked as a lawyer, a university tutor, a union organiser and a tea lady. She wrote a PhD on animals in the works of Charles Dickens, at the Australian National University. She gives frequent readings of her work in Canberra and elsewhere, and often dabbles in the foul pit of literary competitions, sometimes with success. She has judged poetry competitions, too, which probably puts her on a particularly interesting level of Dante’s Inferno. Her latest publication (late 2016) is Quick Bright Things: Poems of Fantasy and Myth.

Rohinton Daruwala lives and works in Pune, India. He writes code for a living, and poetry and speculative fiction when he can.

He tweets as @wordbandar and blogs at wordbandar.wordpress.com. His work has previously appeared in the anthology To Catch a Poem and in magazines such as Strange Horizons, New Myths, Star*Line, Liminality and Through the Gate.

Deborah L. Davitt was raised in Reno, Nevada, but she received her MA in English from Penn State, where she taught rhetoric and composition before becoming a technical writer in industries including nuclear submarines, NASA, and computer manufacturing. She currently lives in Houston, Texas, with her husband and son.

Her poetry has garnered her two Rhysling nominations, and has appeared in Star*Line, Dreams & Nightmares, Silver Blade, and multiple other venues; her short fiction has appeared in InterGalactic Medicine Show, Compelling Science Fiction, and Altered Europa, with stories set to appear in The Fantasist and Abyss & Apex within the next year. Her critically-acclaimed Edda-Earth novels are available through Amazon. For more about her work, please see www.edda-earth.com.

Simon Smith is an electronics engineer from Southern England. Having long since lost interest in his chosen profession he now lives in a fantasy world of books and ideas. He has previously been published in Bewildering Stories.

Christina Sng is a poet, writer, and artist. Her work in Japanese short form poetry, science fiction, and horror has received numerous accolades, most notably, Second Prize in The 2016 San Francisco International Competition for Tanka, Third Prize in the 2016 Annual Harold G. Henderson Award for Haiku, nominations in the Dwarf Stars and Rhysling Awards as well as Honourable Mentions in the Year’s Best Fantasy and Horror. She is the author of several collections, including Elgin Award nominee An Assortment of Sky Things (Allegra Press), A Constellation of Songs (Origami Poems Project, Allegra Press), Catku (Allegra Press), Astropoetry (Alban Lake Publishing), and A Collection of Nightmares (Raw Dog Screaming Press).

A.C. Spahn is the author of the Endurance series of comedic sci-fi novellas. Her short stories have appeared or are forthcoming in Outposts of Beyond, The Mensa Bulletin, Disturbed Digest, and other venues. She wanted to be an interstellar starship captain when she grew up. Since nobody was hiring, she became a writer instead. She enjoys training in martial arts, organizing messy rooms, and researching a hobby-of-the-month. When not commanding imaginary starships, she lives in Pennsylvania with her husband, son, and feline overlord.