This contest is open to all poets, including non-members of the SFPA. Poets may enter in three categories:

All sub-genres of speculative poetry are allowed in any form. Entries will be read blind. The contest will close on August 31, 2017, and winners will be announced by October 1. Winners will receive a $100 First Prize, $50 Second Prize, and $25 Third Prize in each category, as well as publication.

To enter or learn more, see the submission guidelines  on the official SFPA contest website.

NIKIA CHANEY is author of two chapbooks, Sis Fuss (Orange Monkey Publishing, 2012) and ladies, please (Dancing Girl Press, 2013). Chaney has won grants and fellowships from the Barbara Deming Memorial Fund for Women, Poets & Writers, Millay Colony for the Arts, Squaw Valley, and Cave Canem. One of her poems was chosen by Nikki Giovanni as the winner of the 2012 OSA Enizagam Poetry Award. Her work has appeared in Iowa Review, Portland Review, New York Quarterly, and elsewhere. Her poem, “hummingbird,” was recently selected to be made into a musical score and film by MOTIONPOEMS. You can watch the film and read the poem on her website. 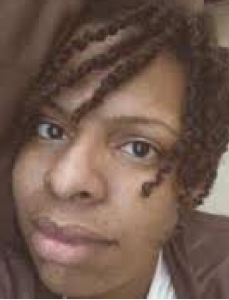 Chaney is a founding editor of shufpoetry, an online journal of experimental poetry, and Jamii Publishing, a publishing imprint dedicated to fostering community among poets and writers. In 2016, she was appointed the fourth Inlandia Literary Laureate for the Inlandia Literary Arts Institute. As Laureate, she has worked to establish a second office in San Bernardino and has participated in many local events, including a black history spoken word event celebrating black women artists, a drum circle, and a performance poetry class.

A recent Science Fiction Poetry panelist at LOSCON, Chaney has some fascinating ideas about speculative poetry.

“The word ‘experimental,'” Chaney says, “is woefully inadequate in explaining my own ideas of what I try to do with my poetry.  Perhaps the word speculative would be more inclusive.  I have always been interested in poetry that is tactile through the use of white space and nonsensical language.  I believe this is because my first introduction to reading was short science fiction stories of the 1950s.  I truly loved how many of those stories and books took experimental premises and expanded on them until at the end of the story we get to an idea that is truly profound, as if the story itself were only the vehicle for the philosophical question.  I wondered if poetry could that same thing, with music and form taking center stage over content.”

In her own work, the what if question takes center stage.  “Speculative work always asks the question what if,” Chaney says. “I think experimental poetry does that too.”

This theory of speculative poetry is illustrated in one of her current projects, all these names for god, an excerpt of which was recently chosen for an artist feature in After the Pause. This manuscript in progress, images of which are shown below, is a hybrid art and memoir project that explores the feelings of various experiences and memories. 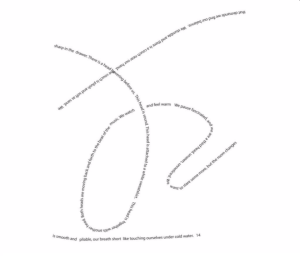 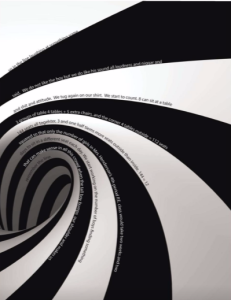 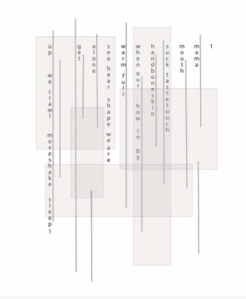 Chaney names Ursula K. Le Guin and Russell Edsen as speculative poets from whom she draws inspiration, citing Russell Edsen’s poem, “Let Us Consider,” as one of her favorites: “In his poem, Edsen says, ‘Let us consider… the young woman who has set herself the task of scraping her shadow off a wall.'”

Chaney can’t wait to start reading your speculative poems. “It amazes me,” she says, “what people are doing!”