Welcome to the second installment of our showcase of poets who have been nominated for this year’s (2017) Rhysling Award. Their poetry can be found in full in the Anthology (which if you are a member, you will receive and if you are not, you may purchase a PDF or pre-order the print anthology now). As noted before, we will link to the nominated poems here where possible (some poems appear only in print but we are working on getting around that…).
So, here, meet the next six poets from the 2017 Rhysling Anthology:

Sarah Ann Winn’s poems, flash fiction and hybrid works have appeared or will appear soon in Five Points, Massachusetts Review, and Passages North among others. Her chapbooks include Field Guide to Alma Avenue and Frew Drive (forthcoming Essay Press, 2016), Haunting the Last House on Holland Island (forthcoming Porkbelly Press, 2016), and Portage (Sundress Publications, 2015). She’s currently a free-range librarian in Manassas, Virginia. Visit her at bluebirdwords.com or follow her @blueaisling.

Greer Woodward writes short fiction, poetry, lyrics, and plays. Her poetry is in Star*Line, Scifaikuest, Illumen, and the three themed anthologies, Halloween Haiku, Zen of the Dead and Lupine Lunes. She was an Associate Editor for the anthology series Sybil’s Garage. She’s a graduate of Clarion West, one of the founders of the New York City writing group Altered Fluid, and a member of the Hawaii Writers Guild on Hawaii’s Big Island. For two of her comic poems please see “Demon Lovers,” and “Crater Conundrum Pizza” 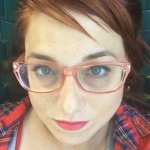 E Kristen Anderson is a Pushcart-nominated poet and author who grew up in Westbrook, Maine and is a graduate of Connecticut College. She has a fancy diploma that says “B.A. in Classics,” which makes her sound smart but has not helped her get any jobs in Ancient Rome.

Once upon a time she worked for the lovely folks at The New Yorker magazine, but she soon packed her bags and moved to Austin, Texas where she works as a freelance editor and writing coach. Wearer of many proverbial hats, she is an editor at NonBinary Review, helps make books at Lucky Bastard Press, and is a poetry editor at Found Poetry Review.  As a poet she has been published in many magazines including Juked, [PANK], Asimov’s Science Fiction, Hotel Amerika, Contemporary Verse 2, Room and Cicada and she has additional work forthcoming. She is the author of seven chapbooks of poetry: A GUIDE FOR THE PRACTICAL ABDUCTEE (Red Bird Chapbooks, 2014), A JAB OF DEEP URGENCY (Finishing Line Press, 2014), PRAY, PRAY, PRAY: Poems I wrote to Prince in the middle of the night (Porkbelly Press, 2015), ACOUSTIC BATTERY LIFE (forthcoming from ELJ Publications), 17 DAYS (forthcoming from Choose the Sword Press), FIRE IN THE SKY (forthcoming from Greybook Press), and SHE WITNESSES (forthcoming from dancing girl press).  She blogs at EKristinAnderson.com Follow her on Twitter @ek_anderson

Sara Backer is a New England poet who enjoys tramping around in the woods. Her speculative poetry has been recently been published in Asimov’s Science Fiction Magazine, The Pedestal Magazine, Silver Blade, Illumen, Bracken, Allegro (UK), Hermes Poetry Journal (UK), and Shooter Literary Magazine (UK) and is forthcoming in Strange Horizons. Her hybrid chapbook, Bicycle Lotus, won the 2015 Turtle Island Poetry Award. Follow her publications on Twitter @BackerSara or her web site, sarabacker.com.

Shannon Connor Winward is a Delaware editor and author of literary and speculative writing. Her poetry has been nominated for a Rhysling award, and appears widely in such venues as Analog, The Pedestal Magazine, Strange Horizons, Literary Mama, Star*Line, Thank You For Swallowing, Eternal Haunted Summer and Enchanted Conversation: A Fairy Tale Magazine. Her stories have been published (or are forthcoming) in Psuedopod: Artemis Rising, Persistent Visions, Cast of Wonders, Gargoyle, Spinetingler Magazine, Flash Fiction Online, Plasma Frequency Magazine, PANK, and Heiresses of Russ 2015: The Year’s Best Lesbian Speculative Fiction (Lethe Press) as well as in genre anthologies on both sides of the Atlantic. A Semi-Finalist in the Writers of the Future Contest, Shannon was also runner-up for an emerging artist fellowship in literature by the Delaware Division of the Arts in 2014 and 2015. In between fiction, poetry, parenthood, and other madness, Shannon is also Madame Secretary for the Science Fiction Poetry Association, a poetry editor for Devilfish Review, and founding editor of Riddled with Arrows Literary Journal. 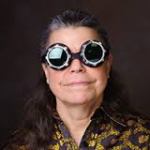 F.J. Bergmann writes poetry and speculative fiction, sometimes horribly, that has appeared in Apex Magazine, Black Treacle, Eschatology, Horror Garage, Spectral Realms and a bunch of regular literary journals that should have known better, and is the editor of Star*Line, the journal of the Science Fiction Poetry Association, and the poetry editor of Mobius: The Journal of Social Change.

Come back soon for Part 3 of our Rhysling Poets’ Showcase!