Jenna Le is the author of  the 2016 book of poetry, A History of the Cetacean American Diaspora (Anchor and Plume Press), which received 2nd place in the 2017 Elgin Awards . She is also the author of Six Rivers (NYQ Books, 2011), which was a Small Press Distribution Bestseller.  Her poetry, fiction, essays, criticism, and translations appear or are forthcoming in AGNI Online, Bellevue Literary Review, The Best of the Raintown Review, Crab Orchard Review, The Los Angeles Review, Massachusetts Review, The Village Voice, and elsewhere. She’s a Minnesota-born Vietnamese American, and earned her B.A. in mathematics as well as an M.D. degree. She currently lives and works as a physician in the Upper Valley region of New Hampshire. Le has been a Minnetonka Review Editor’s Prize winner, a two-time Pharos Poetry Competition winner, a William Carlos Williams Poetry Competition finalist, a Michael E. DeBakey Poetry Award finalist, a Pamet River Prize semifinalist, a four-time Pushcart Prize nominee, a Best of the Net nominee, and a Rhysling Award nominee. We interviewed her recently about her work.

Tell us a little about yourself. How did you get started as a writer? What was one of the hardest things for you to learn?

I began writing poems as a preteen. A couple of things drove me to do it: firstly, I had a crush on a boy at the time, and my early exposure to Shakespeare’s sonnets and the like had taught me that poetry was invented to be a receptacle for lyric expressions of love and desire; secondly, being a typical 12-year-old, I was getting tired of being controlled by forces with which I did not sympathize (externally, this meant the usual authority figures; internally, this meant my obsessive-compulsive disorder), and creative writing gave me space (the blank white page) over which I had dominion, to a certain extent. Almost straightaway, I became preoccupied with some of the poetic problems that continue to preoccupy me to this day: image and metaphor, rhyme and meter and form, how to externalize the internal, how to balance order and disorder, how to carve a niche for myself in the tradition of Shakespeare’s sonnets when I was undeniably not Shakespeare but a 20th-century (now 21st-century) American, with a female, non-Anglo, racially otherized identity to boot.

One lesson I’m constantly learning is the lesson all infants have to learn: namely, that things appear different to me than they appear to other people. I think psychologists call this “Theory of Mind.” Early in my life as a writer, I frequently stumbled over the fact that an image that was very clear in my mind might be fuzzy in other people’s, that a subject that was deeply interesting to me might be boring to other people. Some aspiring writers accept this reality more readily than others; some fight it their entire lives, to their own detriment.

What’s a poem you usually suggest for a reader who wants to read you for the very first time?

This question presupposes that I have a poem I usually suggest to readers who want to read me for the first time. If I had such a poem, it might be my poem “Marsyas,” which is in many ways “representative” of my work of that time period: in the way it tries to think through injustice, cruelty, atrocity; in the way it tries to find a balance between the specificity of lived experience and the absoluteness of math and myth; in the way it falls, almost in spite of itself, into a form, characterized by a regular meter and liberal use of slant rhyme.

Who do you look up to as your literary heroes and heroines? 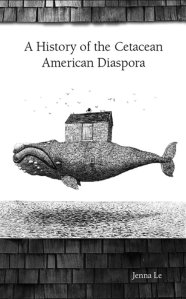 What inspired you to write A History of The Cetacean American Diaspora? What was the most challenging of the poems for you to include in this collection?

At least for me, a collection of poetry comes into existence in a very different way from how I’m told a novel comes into existence: each poem has its own inspiration, its own reason for being. Some of the book’s many inspirations included: the American Museum of Natural History’s 2014 exhibit “Whales: Giants of the Deep”; Rudy Boschwitz’s flavored milk stand at the Minnesota State Fair; my Taylor & Ng “La Baleine” coffee mug; the Waterboys album An Appointment With Mr. Yeats, especially the song “Sweet Dancer,” which inspired me to research the life of Yeats’s mistress Margot Ruddock; my 7th-grade English teacher Mr. Sandeen, who taught me to love the passage in The Song of Hiawatha wherein Wenonah is impregnated by the wind god; some documentary about the Fall of Saigon that was available to watch for free on Hulu, whose name I can’t remember; an advertisement I saw for Le Lam’s documentary Cong Binh: The Lost Fighters of Vietnam; my parents’ oral narratives about their own flight from Vietnam and immigration experiences; embryology class in my second year of med school; various mythology compendia and PBS nature documentaries.

Where would you recommend someone travel to find inspiration as a poet?

I wouldn’t recommend travel to any specific spot. Go where you, personally, as a poet, need to go. Emily Dickinson, in the later years of her life, did not need to go outside her rooms. 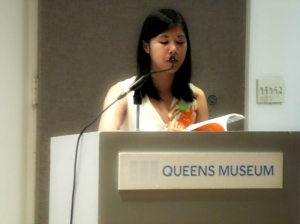 What’s been on your mind these days as you contemplate the direction of Southeast Asian American literature?

The sheer numbers! Every day, I discover new Southeast Asian American poets, especially Vietnamese American poets, every day, there are so many of us. And I’m struck by the diversity of voices, each writer being true to their own unique set of experiences, their own pantheon of inspirations—that’s what sticks out to me most, next to the sheer numerousness: the conviction in each writer’s voice. Which, if you think about it, is remarkable. We’re coming into our own; we’re living at an inflection point, and what it means is that there isn’t going to be just one direction, we won’t all be pressured to emulate a single paradigm, to hitch our wagon to a single trend or trajectory; we will be multifarious and marvelous.

What’s the most interesting territory you feel poets can be exploring these days?

I don’t want to answer this question in a way that’s prescriptive—I distrust all dogmatic pronouncements—but I’m interested in poetry that pushes the boundaries in some way, by questioning and subverting definitions, by mingling/mangling genres, by colliding different fields of human endeavor: say, the way Nicanor Parra collides physics with poetry, or the way Jacques Roubaud collides math with poetry. I’m interested in poetry that doesn’t just incorporate and familiarize and domesticize modern science, but poetry that lets itself be changed by modern science; poetry that, in colliding with modern science, undergoes a chemical reaction into something new, something that both is and isn’t poetry. (This is just one of many territories I’m interested in—another, somewhat related territory is the place where poetry meets music, say, in the work of Bob Dylan or Leonard Cohen.)

What do you loathe in science fiction and fantasy?

Oh, gosh, it’s so much easier to talk about what I love: I love fairytales retold with originality, particularly those drawing from my favorite myths and archetypes—Beauty and the Beast, Tam Lin, The Twelve Dancing Princesses, Jane Eyre. I love coming-of-age stories that use the metaphor of magic to capture the otherwise indescribable enormity of the adolescent emotions of lust, deviant obsession, jealousy. I love intelligent female first-person narrators, especially the bitter cynical ones (and, conversely, I loathe underdeveloped, stereotypical female characters). I love stories that side with loneliness and ugliness and difference (and, conversely, I distrust beauty and conformity). I love love-stories. I love good, character-driven writing, undergirded by a wise author’s strong moral vision. I love when, behind the foreign and fantastical elements in a tale, I glimpse our common humanity.

If you could have any creature, fantastic or real, for a traveling companion, what would it be?

A fellow human being.

There is, of course, an immense pressure to give the answer “Moby Dick.” A good dark-horse answer might be the dolphin who rescued Arion.

What’s your advice for beginning writers who want to write poetry?

Write, and regularly. Don’t wait for the lightning-strike of inspiration. Treat writing as if it were work, holy work, like gardening, or some kind of handicraft passed down through the ages. It requires, above all, dedication, a willingness to come back to one’s writing desk again and again, despite the risk of failure, the reality of failure. Lady Catherine de Bourgh said, “There are few people in England who have more true enjoyment of music than myself, or a better natural taste. If I had ever learnt, I should have been a great proficient.” Don’t be Lady Catherine de Bourgh. (I know many Lady Catherine de Bourghs.) Commit yourself to learning, to mastering the tools. Don’t look down on tools you haven’t yet learnt: “I have no use for meter, it’s old-fashioned,” etc. Be open to feedback from others, because it reinforces the lessons of Theory of Mind, but be suspicious of the people giving you feedback if they themselves seem not to have mastered Theory of Mind. Make one trusted friend whom you can always rely on for honest, right-minded feedback. Then be careful not to lose said friend—who among us mortals can tell, maybe the friendship will end up mattering more than the poetry.

One thought on “Words, Whales and Wonder: An Interview with Jenna Le”