The Science Fiction and Fantasy Poetry Association has designated November 3rd as International Speculative Poetry Day to bring attention to the genre of poetry influenced by science fiction, fantasy, horror and other imaginative genres.

International Speculative Poetry Day seeks to highlight the vibrant legacy and extraordinary achievement of speculative poets. It seeks to introduce communities to the delights and benefits of reading and writing speculative poetry as well as make speculative poetry an important and innovative part of our cultural life.  Speculative poetry has produced some of the nation’s leading creative artists and influential books, performances, and exhibitions, inspiring other artists, educators, and community builders around the world. 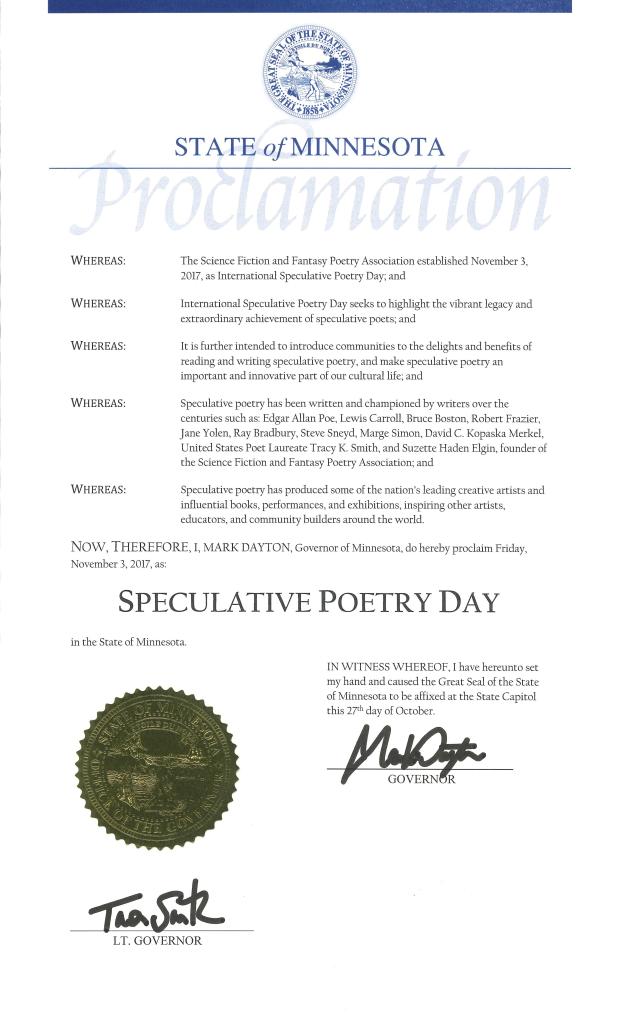 The office of the Governor of Minnesota presented our organization with a proclamation recognizing the day. The Science Fiction and Fantasy Poetry Association is preparing to observe its 40th anniversary in 2018. This will include readings, presentations, workshops, publications and exhibitions across the US and abroad.

The SFPA oversees three major literary awards for poetry: The Rhyslings, the Dwarf Stars, and the Elgin Awards. It also conducts an annual science fiction poetry contest and other special events and gatherings. The SFPA also actively maintains listings of over 78 international publications and literary presses that accept speculative poetry.

The 2017 Elgin Award winners for Book of the Year and Chapbook of the Year were recently announced as Jeanine Hall Gailey for Field Guide to the End of the World and Neil Aitken for the chapbook Leviathan. Books by Jenna Le, Marge Simon, Margaret Rhee, Wendy Rathbone, and John C. Mannone also were recognized by the voting membership. The chair for the Elgin Awards was Minnesota poet Josh Brown.

In the SFPA’s 2017 speculative poetry contest, Nikkia Chaney was this year’s judge. The awards were issued in several categories.

In the Dwarf category, 1st place went to “flight” by Kanika Agrawal, with poems by Adam Veal and Holly Walrath placing 2nd and 3rd. Alicia Payne received an honorable mention.

In the Short category Jake Sheff won 1st place for “On First Looking Into the Sculpture of the Song.” Patricia Gomes and B. Lynch Black received 2nd and 3rd place, with an Honorable Mention awarded to Emma Gibbon.

International Speculative Poetry Day’s observation on November 3rd also coincides with the 60th anniversary of Laika’s groundbreaking journey into outer space, inspiring the world with a renewed sense of hope and what is possible through science, curiosity, and collaboration. The organization is currently conducting officer elections, and recently completed approval of its new by-laws, a necessary step towards formal incorporation as a non-profit organization.

You can visit the SFPA at www.sfpoetry.com